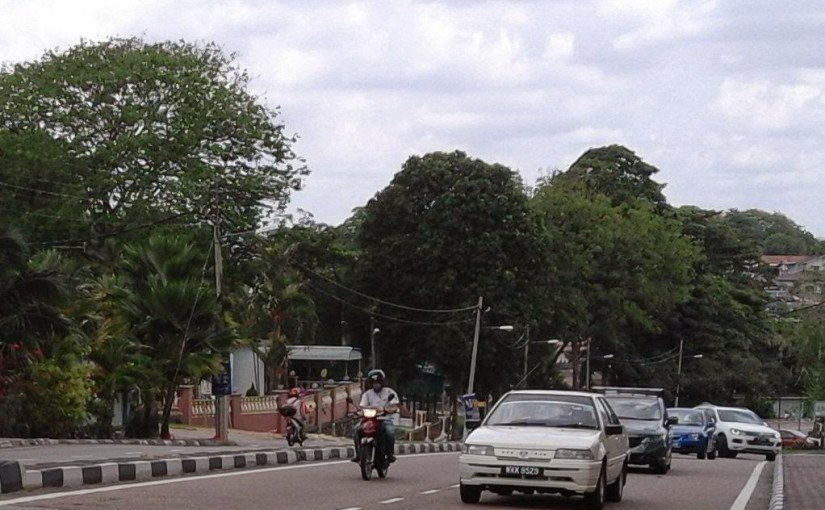 My bag was snatched.  It happened in an instant. I was a victim of crime.

How I became a victim of crime

The other captain and I were riding our motorbike on Jalan Harimau, not far from KSL.

I was the passenger.

We were about to park and I had taken my backpack off to check the time on my phone.  I was holding the bag in my lap.

There were two people on the crime bike too.  One was the snatcher, the other the getaway driver.

We followed them for a while in the hope of getting their number plate, but they were too fast and there was too much traffic.  And it had started raining.

We had just given up the pursuit when we realised we were in front of a police guard station.  One of the cops immediately said “follow me” to the central police station in town.  At 100 kmph in the pouring rain.  But we didn’t lose him.

At the Polis Diraja Malaysia ( Royal Malaysia Police ) in Johor Bahru city, my report was taken by a kind young cop.  It seemed to take forever as his English skills were only slightly better than my uber basic Malay.   And his hunt and peck typing skills were even more rudimentary than his English.

Fortunately my cheap phone, limited cash and Aussie driver’s license were the only items of value.  And more importantly at least we weren’t hurt!

No crime in Singapore

Apparently it’s a totally different story over the causeway.

There is a lot of talk about the prevalence of crime in Johor Bahru.  Especially in Singapore!

On my last visit, a taxi driver told me proudly told me Singapore is the safest city in the world. Then proceeded to go through a litany of recent JB crime:

My taxi driver could probably have continued all day if we hadn’t arrived at my destination.

When I visited an art gallery, and the attendant there told me “Malaysia is like America’s south to us.”

After a couple of weeks one of the inspectors from the JB central police station called me.  He reported they had set up a police block for a kilometer  around the scene of the crime.

But they hadn’t caught the perps or found my bag. No surprises there but I was truly grateful to feel they cared enough to get back to me.

I am interested in hearing about your experience of crime in Johor Bahru in Malaysia and Singapore.  Is Singapore as crime free as the locals tell me?  Is Johor Bahru as dangerous as some people claim?

Johor Who? Three things I love about this dirty old town

Johor Bahru Is Fourth Most Dangerous City In The World

One thought on “Victim of a Crime in Johor Bahru Malaysia”