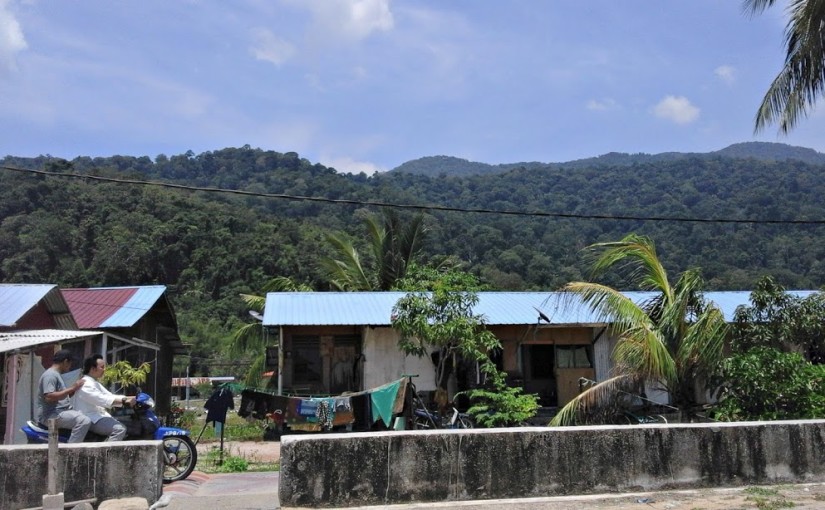 An idyllic anchorage in front of the village of Tekek. Clean clear water. Great snorkeling. Duty free booze. We chilled out on Pulau Tioman (Tioman Island Malaysia).  Ten days had flown past before we even noticed.

Tekek is the “capital village” of Tioman Island Malaysia

We were laying bets on the minimum age for motorcycle riders in Tekek. Maybe six years old? Or perhaps it’s a height thing? If you can reach the pedals you’re legal. Helmets might be illegal in Tekek though. I didn’t see one. Unless you count head scarfs?

We’d been told about the jungle walk to the waterfall.

We got directions from the guys at the Tekek Information Centre. Go right after the first mosque, then was it left after the second mosque? No signage of course. We were lost after the first 20 minutes. No one to ask. It’s a quiet little town.

After a few wrong turns we found the trail. Two and a half hours of mostly uphill climbing we found ourselves in Juara on the other side of the island. Alimak! How did we miss the waterfall?

We saw monkeys, butterflies, a spectacular frill necked lizard showing off in all its camouflaged glory. It was an amazing walk. But no waterfall.

As mentioned in my blog about climbing Frenchmans Peak, I never said I was fit, just up for it. So it wasn’t a hard decision to take a ride back to Tekek. I talked the driver into stopping so we could check out the waterfall on the way back. Underwhelming. Water but no fall. But I wouldn’t have missed that jungle walk for anything. Despite the way my leg muscles complained for the next three days.

I mentioned Tekek is a quiet town. There are no bars. The deal is you buy your duty free wine or beer or whatever and drink it at the table outside the bottle shop, or take it and drink it with your meal at one of the cafes.

Air Batang or ABC is a three km walk from Tekek. There are bars and backpacker joints for the people who come for diving holidays.

The other captain and I thought it might be time for a party night. You know, hit the reggae bars, a few cocktails… It was so quiet we nearly fell asleep! Young backpackers whispering over their bottles of water.

Different to when we were there 27 years ago for our honeymoon.

Well I think it was ABC. But I guess it could have been another part of the island.

We were in Mersing and the locals suggested we visit the island where they shot the 1958 movie South Pacific. I believe this urban legend is now disputed, but we believed them.

Eight hours later, on a slow boat with locals and chickens and goats, we landed at rickety jetty with a backpackers bar. Our accommodation was simple A frame hut for $2 per night. The “ablution facility” was a waterfall, complete with monkeys. But that backpackers bar rocked!

Are we nearly there yet? Sailing adventure to Tioman Island

100 miles of solitude in the Aussie outback? Road trip to Esperance

2 thoughts on “Ten days in Tekek. And How We Missed the Waterfall on Tioman Island”