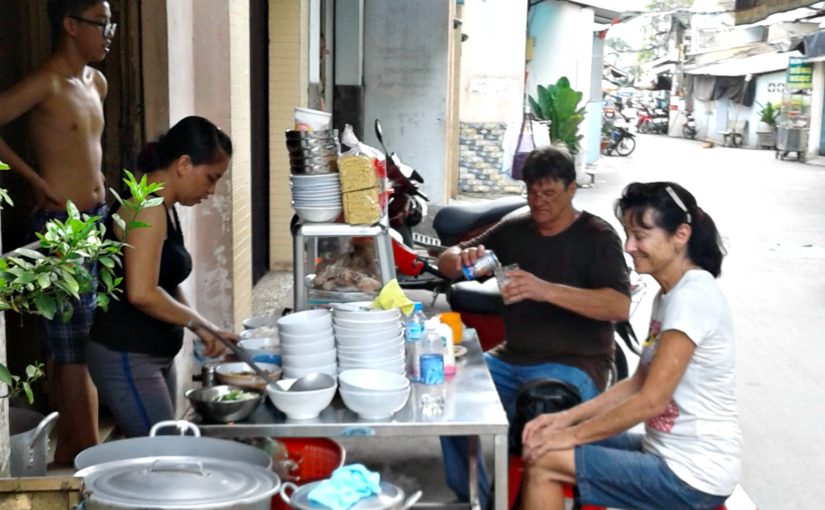 I fell in love with the Nam the first time I was there.

For our second visit to Saigon, Vietnam (Ho Chi Minh City) we’d been given the use of our friend Mr Lee’s apartment and driver. As it turned out, our driver didn’t speak English but came with an interpreter, the delightful sales manager from our generous friend’s business.

We were travelling with the other captain’s brother, a veteran of the war (sort of, I’ll explain later).

The apartment was a mansion. Twenty rooms, four storeys, a lift. Designed to be a hotel originally. Complete with a live in houseman to open the Fort Knox gates.

We only spent a few hours in our splendid apartment before we were whisked off on an adventure. Our driver and intrepid interpreter took us to a meeting at Long An  University, where we met up with Mr Lee’s brother and friends for a road trip.

Heading for Ban Tre we had a few stops. For food and drink of course.

First, a feast of lẩu nấm (I think), the Viet version of steamboat, by the side of the road. It’s no secret local food ordered by locals is better.

On Day 2 we set off for a day of exploring. Well we were actually just visiting one of our road trip team’s parents.

We trundled down the skinniest road with lush jungle on either side. Occasionally having to pull over so motorbikes could get past. One guy had three fat pigs in a basket, another had two lively looking black and white goats on board. The biggest load I saw was a motorbike towing a trailer carrying enough reinforced steel to build a small house.

One guy had three fat pigs in a basket, another had two lively looking black and white goats on board. Click To Tweet

End of the road

The road ended at a Mekong river tributary.  A small barge ferry, big enough for motorbikes, people and small livestock, arrived shortly after we’d parked at the impasse.

We walked through tiny local markets, and tall shady trees on streets only wide enough for motos and pedestrians. To our friend’s parents place deep in the jungle.

Jungle hideout deep in the burbs

Over the long lazy afternoon we had a karaoke session (I watched), drank more fresh coconut water (I had stopped worrying about the dangers of overdosing), cooked (mum let me cook two banh xeo pancakes), and ate the most delicious spread of local dishes. Over fascinating conversations.

Stories of the war

The locals call it the American War. The other captain’s brother was in despatch in the Australian army as a teenager, flying over Vietnam but never landing. (So not technically a vet.)

The more I learn about the Vietnam War (the one going on when I was growing up in Australia), the more I feel it was such a tragic waste of lives and everything else that got blown up. Yet I have never felt Vietnamese people I’ve encountered to be resentful.

One of my road trip friends told us how he fled his village with seven on the moto, including his mum and dad, sister and kids. Ten years later when interviewing locals with an American journalist, the journo remarked he was surprised the people who’d been locked up in prison in appalling conditions were so happy. The reason: they were simply happy to be free.

At the end of Day 2 we were deposited safely back at our borrowed apartment in Saigon Vietnam.  We spent a week wandering around dodging the legendary motorbike traffic and taste testing the backstreets Pho.

I wonder if I’ll get a third chance to visit HCMC? I’d love to sail there one day…

A Lament for Vietnam