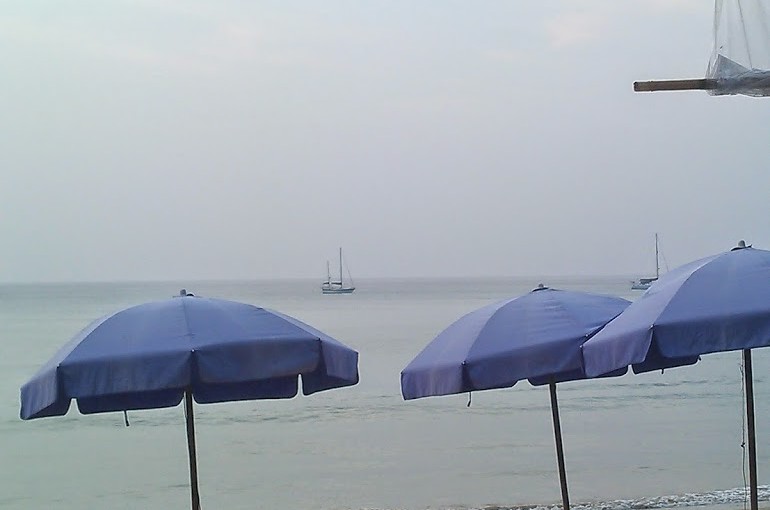 I’ve dreamed of travelling since I was in primary school. I’ve dreamed of sailing cruises all my adult life.  My Almost Circumnavigation of Phuket Cruise was all I’d ever dreamed of but much much better.

December and January are perfect for sailing cruises around Phuket Island, Thailand

Our perfect sailing cruise began with three boats and three fun families anchored off Kamala Beach for Christmas and New Years.
The weather was just right for a leisurely anchorage crawl in Yana de Lys starting at Yacht Haven at the north east tip of Phuket, sailing in company with two more yachts: Sweet Robin and Black Pearl.

The Butterfly Bar was our second home

When we first arrived at the beach in our dinghies the staff at the Butterfly Bar made us feel so at home we made it our second home.
They watched our tenders (dinghies) when we went out exploring for the day.  More on Yana de Lys’s tender later.
The bar staff took our laundry, ordered our ice and had them all delivered.  Gave us use of their simple shower.  Cooked fabulous local food, and sold us cold beers.
Kamala Beach is all eye candy according to the boys.  Plenty of Russian ladies parading in G-string bikinis and high heeled bling sandals.  Even the babies couldn’t have been cuter if they tried.  What’s not to love?

Of course there were lanterns to launch and lots of fireworks for New Years Eve. That’s how it is in Thailand.
Just before midnight a rogue firecracker travelled horizontally along the beach rather than up into the sky.  Straight into our tender.
Yep.  Out inflatable dinghy was blown up by fireworks.
Fortunately no one was hurt!

100 plastic water bottles to the rescue

It took a month, but the owner of the bar where the bad firecracker came from compensated us. We ended up with a better tender as a replacement.

In the meantime nothing could stop the most perfect of sailing cruises.

We simply filled the ruined section of the disabled dinghy with over 100 empty plastic water bottles, wrapped up the hole with plastic garbage bags and a whole lot of gaffer tape and continued sailing up the west coast of Phuket and beyond.

After our Kamala Beach anchorage we cruised slowly slowly for another month up past Phuket to Khao Lak.
Along with the lapping of the ocean, the soundtracks we fell asleep to varied vastly.  At Khao Lak there was a weird kind of stereo with Johnny Cash covers from the north and tribal drumming from the south.
Just the sea was the lullaby at our most peaceful anchorage, Thai Muang.

We had Fleetwood Mac covers at the chaotic circus that is Patong Beach.

All perfect sailing cruises have to end some time

You can’t really circumnavigate the island of Phuket because there’s a bridge at the north end.  So after Khoa Lak it was time to head back south and around the island to our home mooring at Yacht Haven.  And start getting ready for our cruise to Borneo.

Now I’ve said this before, but it’s still true: If you like my post feel free to share it on all your social media, because sharing is sexy.

And if the sailors reading this blog really want me to include the anchorage points I can. Just let me know in the comments.

Sailing from Phuket to Langkawi (Don’t mention the pork)

I daydreamed of sailing trips in the tropics for more than 20 years before my dreams finally came true. A lot of life got in the way before I started cruising.

After we bought Yana de Lys  we spent a few years fixing her up in Langkawi, then heading back to Australia to make more money to continue fixing her up, then doing short sailing trips around the 99 islands of Langkawi, then going home to Australia to make more money. Repeat. Rinse. Repeat again. You get the picture Yogi Berra.
Not all of the things we fixed worked out as we would have hoped as we discovered sailing from Langkawi to Phuket.
If you’ve been following my sailing trips in the Stranded in Paradise series, this is the epilogue. If not, you can read the story so far in:

Dreaming of a sailing trip when nothing goes wrong

When I first heard of Candy Chang’s Before I Die projects all I wanted to achieve before I shuffled off this mortal coil was sail Yana de Lys to a destination with no significant gear failure.
Well yay. It’s happened. And it feels goooood.

After spending eight months in Boat Lagoon Marina replacing the perished, seriously leaking teak decks and fixing all the things that broke on our way over from Langkawi we sailed up to Yacht Haven on the north east of Phuket.
Yacht Haven is as beautiful as its name make it sound. Perfect for sitting out the wet season and hanging out until we’re ready for our next move. And it’s just round the corner from our new playground: Phang Nga Bay.

Phang Nga Bay became famous when they shot scenes for the 1974 James Bond movie The Man with the Golden Gun. The towering limestone cliffs are breathtaking, other worldly. The sea caves are like weird natural cathedrals with beaches.

So far we have stayed at anchorages off Koh Wai Noi, Koh Phanak and Koh Hong. We haven’t covered any vast distances (one day we made a major passage of 3.8 NM LOL) but everything that matters on Yana has worked just fine.

Okay there’s one tick off my bucket list. My next goal before I die is to figure out how to set up my financial feng shui so there is always more money flowing in than out. I’ve learnt you can’t survive on spectacular scenery and seawater. Any ideas?

100 Plastic Water Bottles to the Rescue

Candy Chang: Before I die I want to… 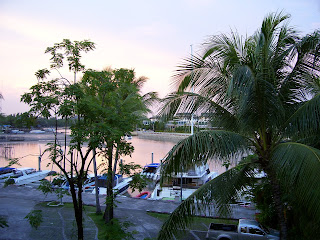 Livin in a serviced studio apartment in Boat Lagoon is all good.  My balcony overlooks the meandering mangrove river leading here.  The air is fragrant with tropical blossoms.  And in the mornings and especially the afternoons we have regular Minibus Mayhem when the minivans descend to deliver and collect the tourists who are heading for or have spent the day on Phi Phi Island or wherever. 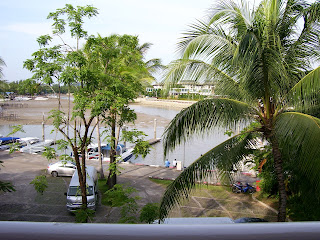 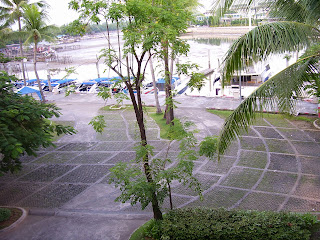 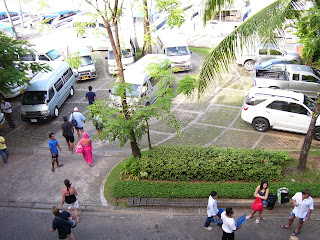 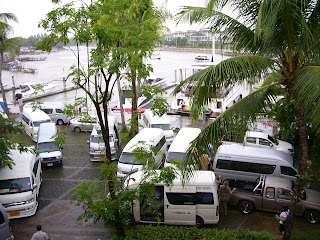 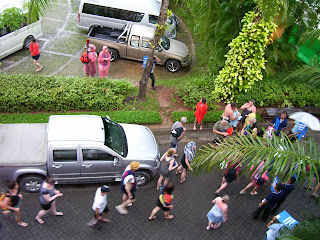 This week Minibus Mayhem reached giddy heights with minibuses double parked around the circle (roundabout to Australians) just before my apartment  and a double decker coach joined the fray.  The coach had to back up at least 500 metres because it simply couldn’t manoeuvre . What’s it going to look like in high season? 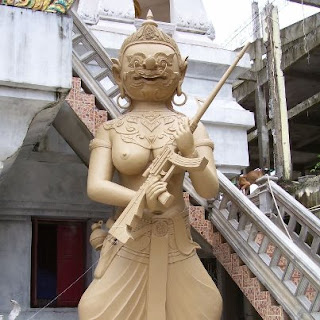 Farang is what the locals call foreigners.  I think it’s a neutral term, unless it’s being applied to foreigners behaving badly. (Heaven forbid – we’re their guests here!)
It sure is strange and challenging living in a country where they not only speak a different language but use a completely different alphabet. Where the statues at the Buddhist temples carry machine guns.  Where road rules are merely guidelines. (I swear a red light means “proceed with caution”).  Where false advertising is as common as noodles and rice.
Speaking of rice and noodles I love the food here, despite the process of ordering being an entirely hit and miss affair.  The non farang menus are simply indecipherable – sometimes it’s just a case of pointing at what someone else is eating and saying I’ll have one of those.
At our favourite barbeque place over the road here from Boat Lagoon, the waiter very proudly showed me their new “English language” menu the other night. I reckon Google Translate has a lot to answer for. Here are a couple of examples of dishes on offer:

I assume they’re machine translations, but I guess I’ll just have to get the guts to order them to find out what they really are.  For now I’m just going to stick with pointing at the delicious looking food they have displayed.

Meanwhile the Yana de Lys deck replacement is going ahead at a rapid pace.  We have stripped the old teak off, and have a small team of locals sanding the old surface ready for the new paint and non slip. 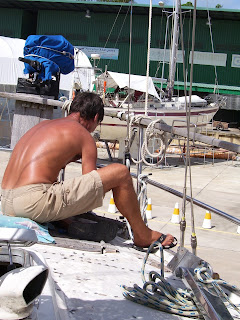 Boat Lagoon is a fantastic place to get work done.  I still can’t get over the lack of water in the marina though.   Before we moved Yana onto the hard stand we spent at least half of our time with 0.0 meters reading on the depth sounder.  We were literally parked in the mud.  And then the hard stand and the board walks flood at spring high tides.  Bizarre. 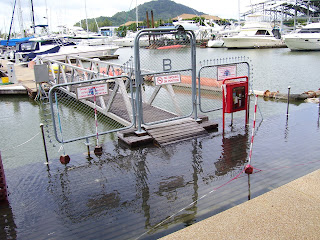 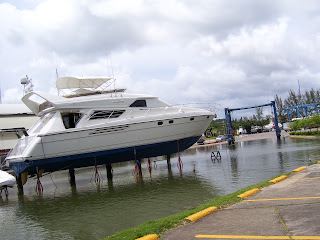 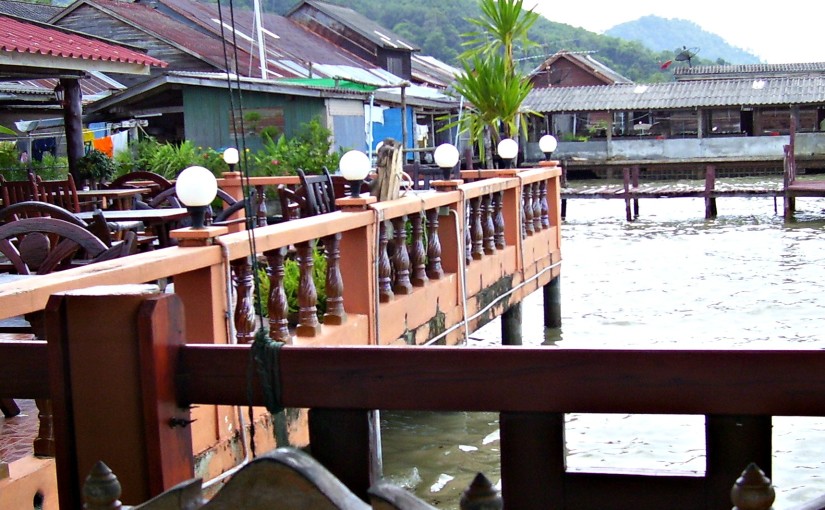