I could smell incense. I thought I could see a hidden temple. So I parked my motorbike on the side of the road. And carefully threaded my way down the treacherous slope.
I crossed the dodgy bridge to where I glimpsed some buildings in the jungle.

Aah I thought so.  A Hindu temple.  Run down.  With empty Tiger beer cans, crushed cigarette packs and other rubbish lying around.  I like the lack of reverence.  Opposite to my strict Catholic upbringing.

“Sshhh don’t talk during mass or you won’t get an ice cream after”.

In Hindu tradition, there is no dividing line between the secular and the sacred.

Ganesh on my radar

As I wandered around the hidden temple I recognised Ganesh, the elephant-headed god.  He is the god of wisdom and learning.
I keep a small statue of him on top of our radar on Yana de Lys.  His job description is “remover of obstacles”.  I’m not sure if I have our relationship right though because I can’t get my radar to work.
This week I had a local Moslem guy helping me with the trouble shooting.  When he saw Ganesh there he said “That’s why it cannot on”.    (“Cannot on” is the technical term in SE Asia for anything that won’t work).
I have an email pen friend at the Furuno office in Singapore.  He’s been giving me troubleshooting ideas.   His latest advice is to bring the unit in for his people to check out.  Looks like another trip to Singapore coming up.  Any suggestions for art galleries to visit?

I drive past the temple entrance on my way home from Permas Jaya town to Senibong Cove Marina nearly every day.
Recently I was intrigued to see a frenzy of motorbikes and cars parked there as I rode past. This went on for some weeks.  A work party.  They’ve chopped down the jungle which gave it atmosphere.  It’s not a hidden temple anymore.  Everything is in plain view.  And painted a nauseous shade of green!  Oh dear.

While I was meditating at the no longer hidden temple in the jungle, I started thinking about my blog.  (I have to admit I didn’t meditate long.  I was attacked by a swarm of non vegetarian mosquitoes.)
Are my readers disappointed that my adventures are all “Land trips on the side” lately?  Rather than sailing on Yana de Lys?  I’m still living on Yana de Lys.   Still living the dream, still loving living in Malaysia. Just waiting to get my ducks in a row before crossing the South China Sea to Borneo…

All I ever dreamed, but better
Before I die
5 Reasons I like visiting Singapore
Ganesh 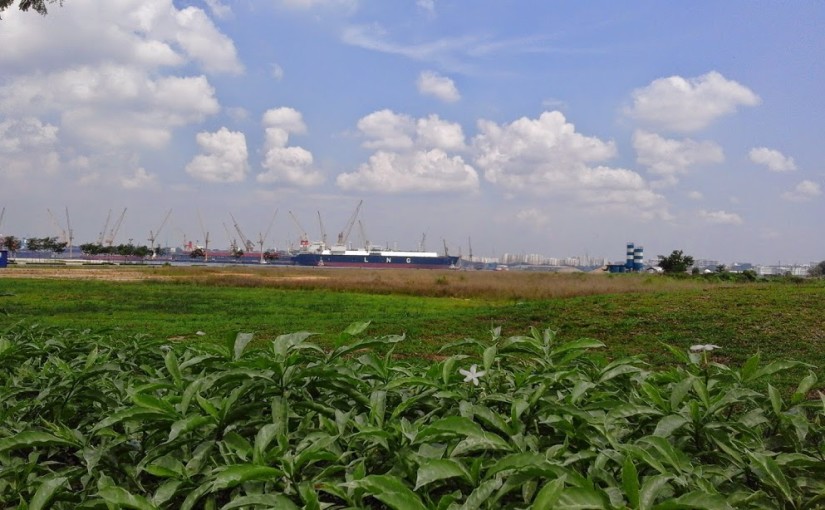 I like visiting Singapore because it is so totally different to Johor Bahru, which is where I’ve bee staying on my boat Yana de Lys.

Singapore is just 0.8 nautical miles away from our berth in the Senibong Cove Marina.

Here are five reasons I appreciate having Singapore in my backyard.

Visiting Singapore is easy for me.  Getting there from Senibong Cove Marina is quick, cheap and simple.

I take the Yarley, my 125 cc Yamaha moto (scooter) into town.  Park just under the stairs to the Customs and Immigration Building.  Take the bus from Johor Bahru in Malaysia to Woodlands, Singapore.  A border crossing bargain at $1.70. I get a ninety day visa for free.

If there are no traffic jams on the causeway l can be there in less than an hour.

On my last visit to Singapore a, taxi driver told me “A blind man could make his way around Singapore on the MRT”.  (He also told me Singapore has no crime.)

Hmm.  Well the MRT is easy to navigate.  And I haven’t been the victim of any crimes in Singapore either.

When I’m visiting Singapore I always try to get an art fix by visiting a gallery or two.

I found the feast of galleries in the Old Hill Street Police Station.   One of my favourite exhibits was an Andy Warhol style treatment of  Lee Kuan Yew by local artist Sukeshi Sondhi.

I’m not talking about the designer brands in Orchard Road.  High heels and haute couture are irrelevant on a cruising yacht.  I’m talking about a genuine chandlers.

I once made the trip just to buy some teak cleaner and an anode.

Yeah yeah I know.  It’s always about the food.

A couple of my favourite eating experiences are:

Under the Radar Singapore Art Secrets

100 Best Things to do in Singapore