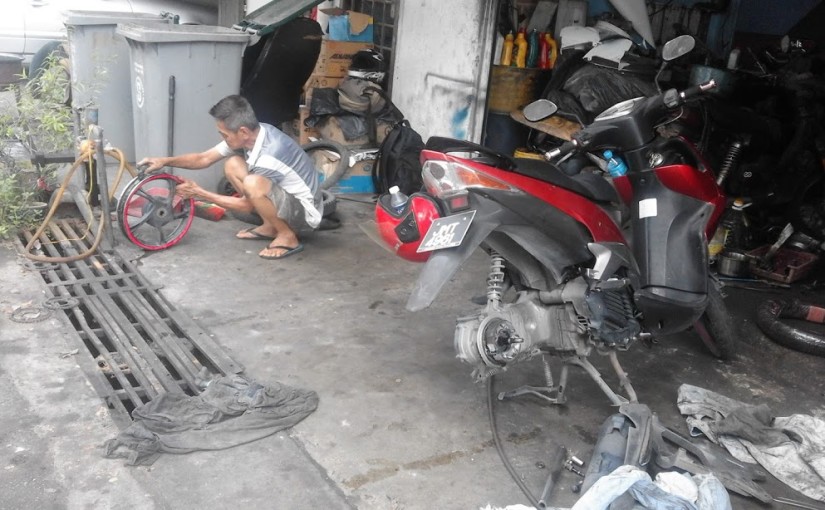 When we sailed past last year, we didn’t stop because there were no good anchorages.  It’s been burning a hole in our bucket list since then.

So we decided to ride the Yarley there.

Why?  Because we had our first flat tyre about 50km down the road.   We had to roll our bike 5km, hot and sweaty and constantly asking myself “are we nearly there yet?” to have the tyre replaced.

(The tyre was trashed.)  Later we learnt you can use the help phones on the side of the motorway.  Don’t you love hindsight?

We had the second flat tyre on our way home.  Apparently (according to a kind Malaysia truck driver) the new tyre was made in Malaysia, therefore not destined to last.

I tried using the motorway help phone.  I was wondering what to do next after five minutes of listening to “Please hold the line” when a kind truck driver stopped.  He offered to take us and our moto to the next town to have the tyre replaced.  With a tyre made in Vietnam.  RM5 cheaper but better quality, so we’re told.

The food in Malacca is fabulous.  The tandoori chicken and naan bread at Pak Putra is sensational.

The Portuguese chicken dish at Eleven Bistro was delicious.

Also I discovered why everyone raves about Malacca’s famous chicken rice balls and steamed chicken. Yum.

Buying wine was a bit tricky, but we managed.  On the first night we found a supermarket selling reasonably priced red wine as we headed out to dinner.  It was okay so on our way back to our hotel we decided to get a second bottle.  The checkout chick in headscarf, asked me if I had finished the first bottle already.  “No no this one is for tomorrow” I said.  Headscarf smiled.

Malacca’s long history is visible in the variety of places of worship from a Catholic church to a temple sponsored by Guinness and Tiger beer.  Well that’s what it looked like anyway.  The columns featured advertising for both beverages.

There are more museums than you can poke a stick at.  Wikipedia lists 38.  We visited two.  The Maritime Museum, housed in a replica of the Portugues Flor de la Mar, a 400 ton nau or carrack (sailing vessel) from the 16th century.

And St Paul’s Hill.  A ruined church with a spectacular view.  Famous for being the temporary resting place for St Francis Xavier’s body enroute to India.

There are churches, mosques and temples everywhere.

A trifecta of temples

Jalan Tokong, AKA Harmony Street, features three temples and a mosque.  You can get your multicultural spiritual fix in one short walk.

The architecture of the Kampung Kling Mosque is a combination of Sumatran, Chinese, Hindu and Malay styles.

I lit incense in the Xiang Lin Si Temple which is run by Buddhist nuns.

On the Sunday I had planned to go to mass at the historic St. Francis Xavier Church.  I have very catholic spiritual tastes and admit I am more lapsed than Catholic.

It was bucketing rain.  The streets were flooded.  So I borrowed an umbrella from the hotel and had a cappuccino and croissant just round the corner instead.  Divine.  So good it was almost a religious  experience.

It was lucky the deluge ended before we headed home.  Another flat tyre in the pouring rain might not have been much fun.

Meet the Fishing Nets
Before I die…
Walking in Harmony
Have you visited Malacca Malaysia?  What were your impressions?  Or maybe you have suggestions for other places worth visiting?  And BTW if you enjoy reading my travel stories I would love you to share my blog!