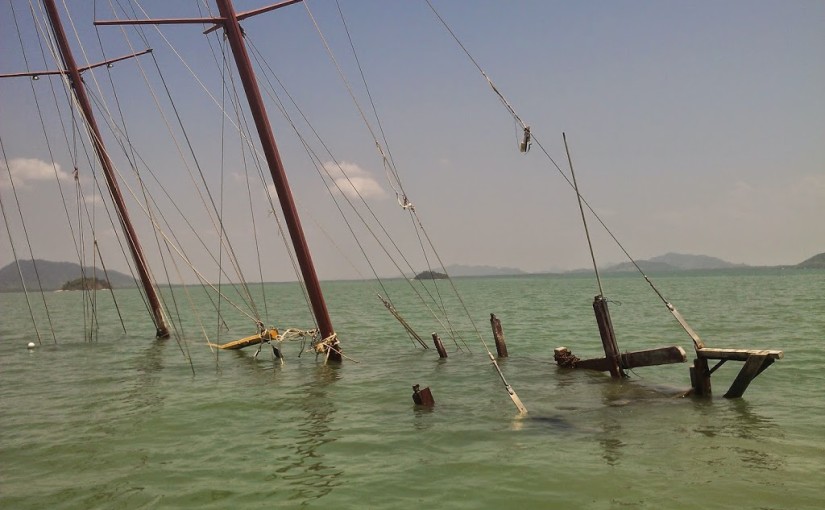 We left Australia in March after replenishing the anorexic bank accounts and returned to Langwaki where we lived in a room above our favourite lunch spot, the Watergarden Hawkers Centre and finished some work on Yana de Lys on the hard stand. 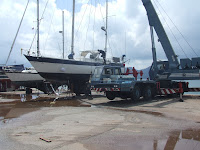 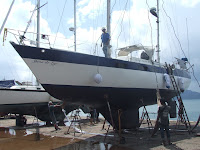 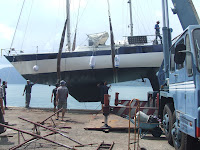 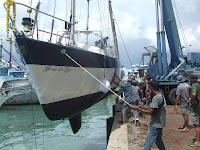 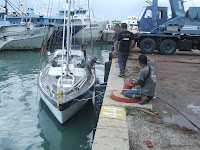 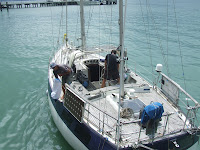 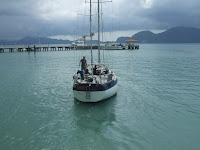 The plan is to sail to Phuket and finish Yana so we can focus on cruising after that.

It’s been fun living in Kuah. Our room came with one TV station – A National Geographic channel which seemed to have The Dog Whisperer on a continual loop.  I saw a Bollywood movie shoot, and one car crash out the window .  No one was hurt in the crash, just a bit of mangled metal and lot of walking around in circles by both parties.  And occasionally I heard all the taxi drivers over the road shouting.  That meant another tourist was driving the wrong way up the one way street.

I treated myself to an Ayurvedic massage in Pentai Cenang  at one point.  The Njaravkizhi treatment was described as a relaxing massage in the brochure, but I did find it a bit hard to relax while I was being bashed by bags of hot rice.

We took the ferry to Penang for three days so we could get our extended Thai visas.  I love Penang.  The food at the Red Garden is sensational.  We ate there every night, even though we tried to talk ourselves into trying somewhere else.

We lost track of how many times we got lost shopping for items for Yana de Lys which weren’t available in Langkawi.  On the third day we decided to play tourists and hire a scooter to check out the Funicular rail at Penang Hill.  It feels like you’re going up vertically. And when you get to the top the views are sensational.  I felt like I could see all of Malaysia, while we drank the most expensive beer of our whole trip.

Meanwhile back in Langkawi we loaded Yana with provisions in readiness for our our trip to Phuket.

Our final anchorage for this trip to SE Asia was at Awana Porto Malay on the south west corner of Langkawi. I planned an extra cautious route as the chart showed lots of areas of shallow water, a wreck and underwater rocks – a real navigational nest of vipers, especially around Pulau Ular (Snake Island). We arrived safely after a detour near Pulau Singa Besar where we hid out during a short storm, and anchored for two nights in company with Sweetie and a fun collection of friends and family.

The anchorage is near the Awana Porto Malay Resort, with its totally incongruous and unmalaysian  Mediterranean-style architecture. We were surprised when they made us pay RM20 per dingy to leave our tenders at their jetty when we first went ashore. As far as we could work out the fee entitled us to use the facilities for 24 hours so we decided to hang out at their swimming pool the next afternoon. At least we got something for our money, including a fresh water shower.

We spent a whole morning exploring the itty bitty Pulau Ular. Contrary to the expectations of the five year old in our party who announced it looked like an “extwemely boring island” as we pulled up in the dingy, we found it endlessly fascinating. The interpretive signs told us it’s a Geological Monument. The rocks are truly amazing. I swear some of the formations look like they have been carved by a talented and funky stone artist. I found a tiny cave filled with bats. And we all feasted on the most delicious fresh oysters straight off the rocks.

When we got back to Kuah, the other captain and I started getting Yana de Lys ready for the planned haul out and (sigh) our return to Australia.

Continuing on we rounded the eastern corner of Langkawi to arrive at the Hole in the Wall anchorage on the north coast, at the mouth of the Kilim River.   Apparently this is where the pirates used to hide out before Langkawi was settled.

There are monkeys in the mangroves and lots of monitors swimming in the river.  Around one bend I counted 14 sea eagles feeding.

We visited the Gua Kelawar (Bat Cave).  At the end we realised we hadn’t seen any bats though, so we started again from the beginning,  and there they were, hundreds, maybe thousands of the cute little critters hanging up right at the entrance.  We’d been too busy marvelling at the stalactites and stalagmites to notice them before LOL.

There are a couple of fish farms and a floating restaurant just round the corner from our anchorage.  When we dropped in to the restaurant for refreshments, Rod asked for a couple of Tiger beers to begin with.  “No thank you sir, we only have Skol” was the waitress’s terminally polite reply.

Those places get their electricity via cables which snake through the mangroves and over the limestone karsts to a jetty about 20 minutes by tender down the river.  At high tide some of the lines hang in the water.

Oh, and now it’s started raining again.  We could be here a while…