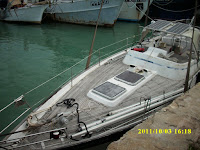 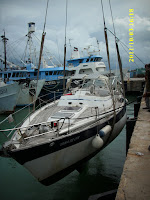 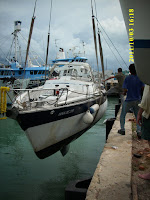 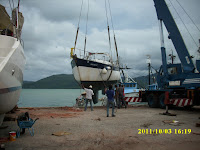 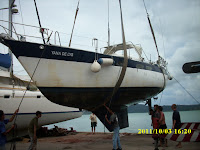 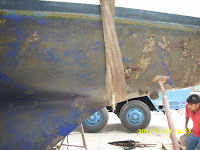 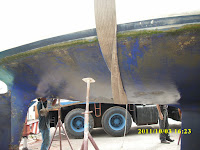 Our final anchorage for this trip to SE Asia was at Awana Porto Malay on the south west corner of Langkawi. I planned an extra cautious route as the chart showed lots of areas of shallow water, a wreck and underwater rocks – a real navigational nest of vipers, especially around Pulau Ular (Snake Island). We arrived safely after a detour near Pulau Singa Besar where we hid out during a short storm, and anchored for two nights in company with Sweetie and a fun collection of friends and family.

The anchorage is near the Awana Porto Malay Resort, with its totally incongruous and unmalaysian  Mediterranean-style architecture. We were surprised when they made us pay RM20 per dingy to leave our tenders at their jetty when we first went ashore. As far as we could work out the fee entitled us to use the facilities for 24 hours so we decided to hang out at their swimming pool the next afternoon. At least we got something for our money, including a fresh water shower.

We spent a whole morning exploring the itty bitty Pulau Ular. Contrary to the expectations of the five year old in our party who announced it looked like an “extwemely boring island” as we pulled up in the dingy, we found it endlessly fascinating. The interpretive signs told us it’s a Geological Monument. The rocks are truly amazing. I swear some of the formations look like they have been carved by a talented and funky stone artist. I found a tiny cave filled with bats. And we all feasted on the most delicious fresh oysters straight off the rocks.

When we got back to Kuah, the other captain and I started getting Yana de Lys ready for the planned haul out and (sigh) our return to Australia.