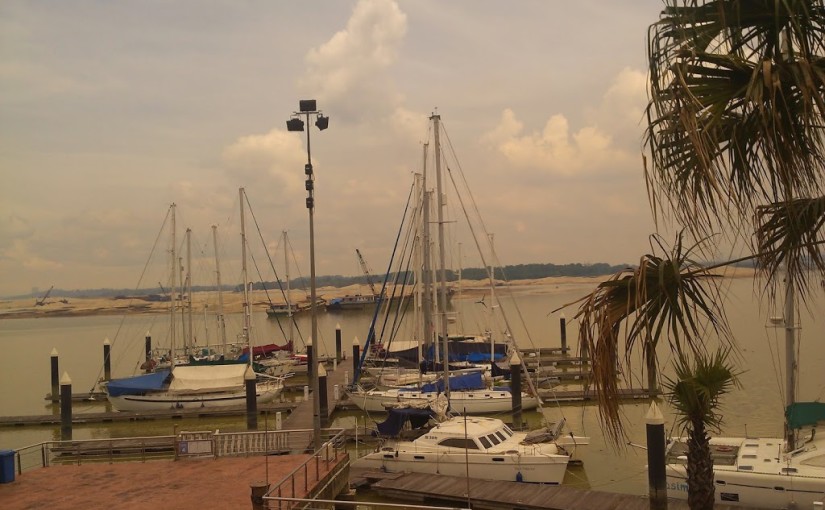 Sailing up the Johor Straits to Danga Bay Johor

Sailing up the western arm of the Johor Straits to Danga Bay Johor was an education in the stark contrasts between Malaysia to our port and Singapore to starboard.

Wonky stilt houses and untidy fish farms on one side, manicured parks and gardens on the other.

At one stage I remarked to the other captain it seemed they were blowing up the golf course on the Singapore side. Until I saw the sign identifying the Singapore armed forces site, warning us to stay clear as they practice using explosives there.

Steering clear of the invisible line

I made sure to steer well over the imaginary line delineating the border because we hadn’t cleared into Singapore and a Singapore customs boat plus two Sing police boats stalked us and kept a very very close eye on our progress.

The marina at Danga Bay Johor is now closed. It was built as a photo opportunity for the potential buyers of the condos planned for the site.

There were huge barges constantly filling in the Strait in readiness for construction.  One evening I heard some shouting from my boat.  Then an almighty thud.  A barge had bashed into our jetty. No people were hurt but the damage was extensive.

A snake in the sink

Another of my more memorable experiences in the marina at Danga Bay Johor was when I discovered a snake in my galley sink.

I was on my own as the other captain had gone back to Australia to work. One morning I lifted the lid on my sink cover and saw a snake slithering round.  I immediately dropped the lid back down.  I’m pretty sure it was as surprised to see me as I was to see it.

And honestly I think it shat itself with the shock because it stunk seriously in there.  I peeked in one more time to check I wasn’t hallucinating before deciding to do the girlie thing and ask for help to get rid of it.

I asked some of the staff who were hanging out on one of the boats on my jetty, but they couldn’t help because they told me “We’re scared of snakes too”.

Then one of my neighbours, the Sultan of Darwin, offered to sort my problem. He came on board and calmly picked up the writhing snake with the multigrips he was using at the time.
I asked him to show the squirming monster to the staff. The staff were suitably scared.
The last I saw of my uninvited guest was when my obliging neighbour took it down below in his own boat to show his wife.

The Sultan of Johor

Speaking of Sultans, the Sultan of Johor Bahru’s residence is just over the road from the marina.  I walked past the grounds and the huge great blinking bling crown at the entrance regularly but was never tempted to trespass on account of the scary signage.

I have absolutely fallen in love with Johor Bahru.  After more than three years of resort islands its grittiness and purely unpretentious localness is incredibly refreshing.   But I couldn’t stay in Danga Bay Johor because the marina was closing down…

Johor Who? Three Things I love About This Dirty Old Town

Are you an armchair sailor? Or dreaming of floating round the tropics? Come cruising with me in these sailing blogs!

Ten sailing blogs in one: Island hopping and day sailing from Langkawi to Danga Bay

The weather gods were kind to us when we sailed our yacht Yana de Lys south from Langkawi Island to Danga Bay in Johor Bahru .
We weren’t hammered by any many sudden storms. We didn’t encounter much wind though, being so close to the Equator.  We spent a lot time motoring, rather than actually sailing.

We were in no rush, just day sailing our way down the west coast of Peninsula Malaysia. Our trip was just peachy, the whole way!

(We’re navigating with Malaysian charts which refer to Island as Pulau, Tanjung as Cape and River as Sungei.)

We spent the first night at Pulau Tuba, just around the corner from Langkawi so we could get a head start on the 50 NM (nautical miles) plus leg to Monkey Beach at the north of Penang the next day.  It was one of the rolliest anchorages I’ve slept in.

Then we started meeting the Fishing Nets.
At our second Penang anchorage off Pulau Rimau on the south western tip, the first net, drifting with the tide and current, wrapped around our bows.
We were enjoying the happy hour view of the islands and the bridge and all of a sudden the local fisherman had caught our yacht Yana de Lys in their 200 meter long drift net.
The fishermen scowled at us when they cut the net off.  It happened so quickly there wasn’t time for us stop the capture ourselves.

The next day we avoided 87 fishing nets.
It was easy enough to figure out how to avoid these nets as they were dragged between two fishing boats.
At our deserted, idyllic anchorage that evening we listened to the call to prayer on the radio and, incongruously, to an Australian Football League match.  Our team the West Coast Eagles lost. Again.

Our course to Lumut was infested with fishing net flags. In shallow water.

The trick is to work out which flags go together and if you can’t avoid going over the net in between head for the middle, take the engine out of gear with enough boat speed to propel you forward and hope the net doesn’t end up wrapped around the propeller.

Our strategy worked. But it was a slow 15 miles.

The next anchorage was in front of the Lumut International Yacht Club.

Lovely architecture but not exactly what we expect of a yacht club.  They didn’t serve food or drink or anything.

The call to prayer sounded like a gentle romantic love song.

The Lumut boardwalk infrastructure along the river is really pretty, with the most salubrious public toilets I have ever met.  The blokes toilet is actually a large aviary.

The next stops at Pulau Angsa, Che Mat Sin and Sungei Bernam, where we sort of blended in with other residents of the stilt burbs, were gloriously uneventful.

Some sailing blogs make it sound like hardship, but we were getting the hang of this cruising business.

Then we caught our breath at the Admiral Marina at Port Dickson for a few days.

It was our first marina stay after being at anchor for the last three years.

When I woke up the first morning with another boat’s mast looming largely right there in my porthole I had a nanosecond of Anchor Angst.

Until I remembered where I was and that our anchor hadn’t dragged, but we had deliberately parked this close to another boat.  Phew.

In Port Dickson we stopped for a beer at an unassuming café and ended up staying and eating and staying even longer absolutely spellbound by the chef constantly cooking a minimum of three high speed wok dishes at once.

On the move again the cargo ship traffic in the Malacca Strait was beginning to build up.

I’ve read sailing blogs about pirates in the Malacca Strait. It’s really the big boats we had to worry about, not pirates.

We poodled along in the slow lane with a constant stream of varied commercial vessels parading past in the fast lane.  Flying fish and dolphins kept speed with us.

A peaceful anchorage at Pulau Pisang

When we had just settled in to a very peaceful anchorage at Pulau Pisang some fishermen came up to us and politely asked us to move.

“Boss you move boat boss” indicating the nets they intended to lay out.  So, reluctant at first, we moved and were safe for the night.

Anchored in the middle of nowhere

It was different the next night when we were camped in the middle of nowhere out of the way of the shipping lane freeway.
We were woken by a loud clunking near the bows to find Yana de Lys well and truly caught in a drifting net with increasing burden on the anchor.
With no fishing boats in sight we had no choice but to hack the net off.  It came free with a super loud twang.  The pressure release was scary.  We apologized to the invisible fishermen.

The next night we made it to Danga Bay.  I’ll tell you all about it in my next sailing blogs.