After our stay in HCMC we flew to Bangkok. The other captain and I hadn’t been to Thailand in a while. I’d forgotten how exotic and friendly the Thais are. And how much I love their green curries. The other captain’s brother, an overseas travel virgin, was beginning to get the hang of SE Asian travel.

The plan was to check out the great city then take the overnight train from Bangkok to the southern border town of Hat Yai.

The city of angels

Bangkok is just the name people who don’t come from Thailand call this gritty city. Bangkok translates as “village of wild plums”. Not exactly sexy. Whereas Krung Thep (กรุงเทพ), as the Thais call it, means “city of angels”. The full name translates as:

The city of angels, the great city, the residence of the Emerald Buddha, the impregnable city (of Ayutthaya) of God Indra, the grand capital of the world endowed with nine precious gems, the happy city, abounding in an enormous Royal Palace that resembles the heavenly abode where reigns the reincarnated god, a city given by Indra and built by Vishnukarn.

I didn’t see any angels in the happy city. But I had fun chatting with some beautiful girls on Soi Cowboy when the other captain’s brother asked us to show him the bright lights.

One of the highlights of our stay was a river cruise. With a 150 baht ticket (about six Aussie dollars) you can get off and on Chao Phraya Tourist Boat  as often as you like at the eight piers along the route. You can stop to check out cathedrals, temples, museums, markets and the Grand Palace. 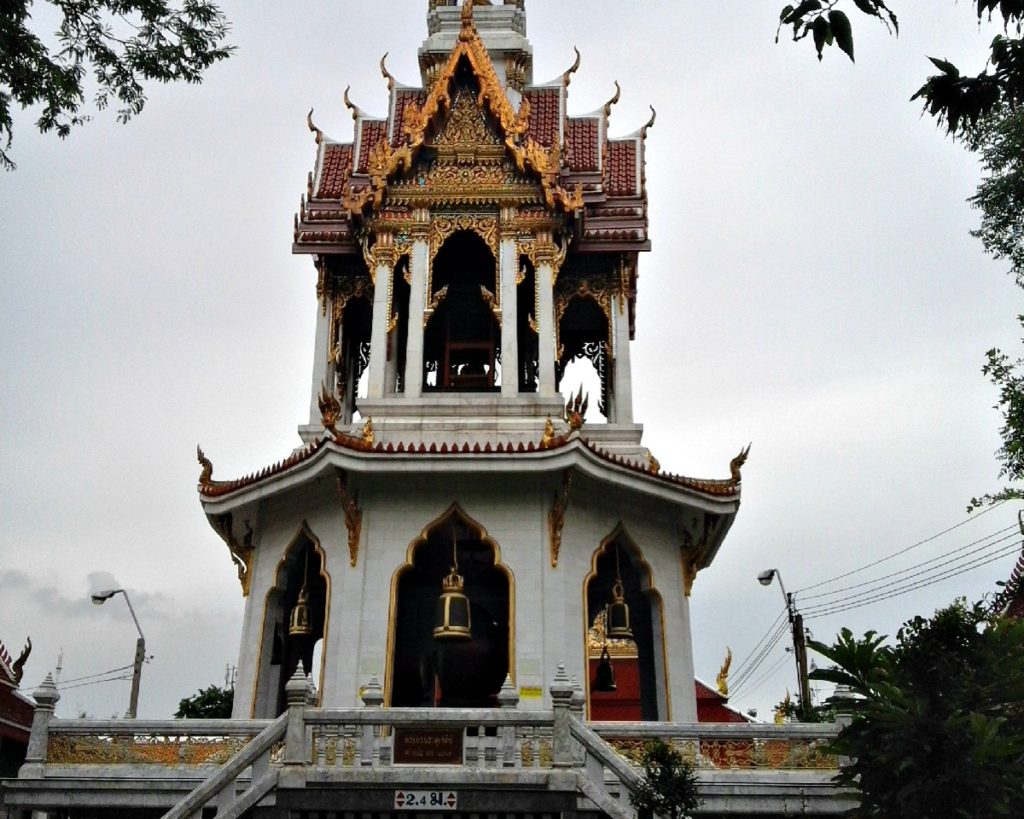 Along the river five star hotels stand next to falling apart local dwellings. Longtail boats fly past. Barges laden down to their water level lumber by. Islands of plants float past.

We stayed in Sukhumvit, right on the Skytrain (Bangkok Mass Transit System or BTS) route, making it easy (and cheap) to get around. Our stop was On Nut, which was simple enough to remember. Our first destination was often Asok, which sounds like asshole when announced over the train PA system. Just so you know.

The slow train from Bangkok central to Hat Yai is a 16 hour trip, leaving at around 2pm.  A sleeper ticket is 1300 baht (1100 for the top bunk). It’s no secret I love train travel. We had no trouble getting our ticket at Bangkok Train Station for the next day. In fact our train was about 70% empty. Our party of three had a pair of two-berth cabins with a connecting door, and one empty berth.

The cabins are clean, simple and comfortable. You can have a delicious dinner set for 170 baht. I had the green chicken curry with jasmine rice, tom yum soup, fruit juice and fresh fruit platter. Yum!

I took this trip by myself when we first bought Yana de Lys.  I’d been to Pattaya to meet the previous owners and collect some boat stuff they were storing. I shared my cabin with a mountain of gear, including a brand new sail belonging to Yana.

Before the train even left Bangkok Train Station the steward had asked me if I fancy a beer for the trip. At the time I thought, “Sure a couple of cans of Chang might be nice for sunset”. Next thing I knew my basin was filled with ice and two king browns. Did I look like I was dying of thirst?

Well it’s different now. Technically you’re not supposed to drink on the train, but we were subtle about it and the staff didn’t seem to care anyway. (There are no smoking signs but the conductors have a puff at the end of the train.)

So if you fancy a beer for the journey it’s a good idea to stock up before you leave. And if you like em cold you can buy some ice from the convenience store at the train station.

Around 6:00 the next morning we arrived in the… er exciting town of Hat Yai. I’ll tell you about it in my next blog. When I get around to it. (Slow travel = slow blog writing.)