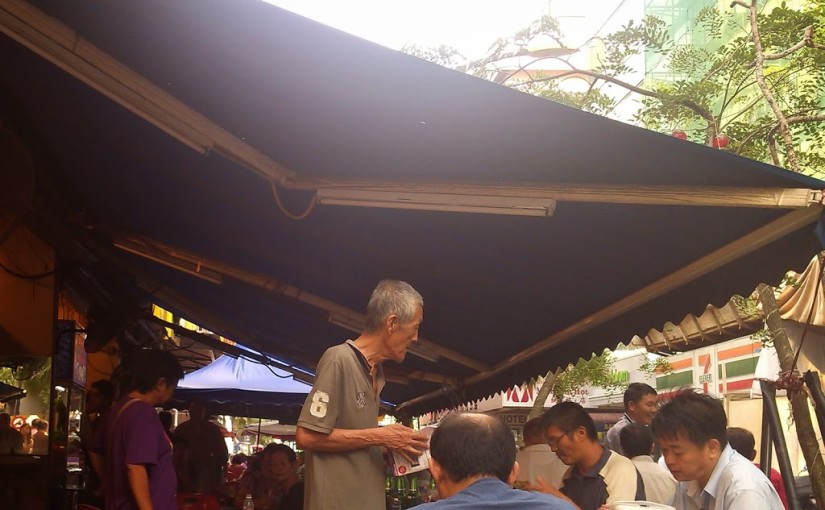 Johor Bahru, the capital city of the state of Johor Malaysia isn’t exactly a popular tourist mecca.  Most travelers pass through on their way from Singapore, just over the causeway (more on that later), to Kuala Lumpur and beyond.

Here are just three things I love about JB in the state of Johor Malaysia:

When the horse races are on in KL and Singapore the street is alive with bookies, gamblers, runners and onlookers.  No-one gets to see the races but a lot of money changes hands.

The locals are incredibly welcoming and friendly. When one of the punters was talking to me I mentioned the other captain used to be a jockey.  Somehow this has become legend and he is known as a world famous jockey there.

Better still, since he won a couple of bets one evening they figure he’s an internationally successful gambler and ask him for his tips.

One evening I attended a puja (prayer ritual) involving countless trays of chopped vegetables and stuff being thrown into a ceremonial fire, interspersed with bundles of wood and oil poured onto the fire to the soundtrack of chanting and drum beating.

At one point the priest’s pyromaniac skills slipped and the whole temple was engulfed in smoke.  I could hardly breathe but it was incredibly atmospheric.

3. Food glorious food.  There is endless variety, and the local food is not expensive. My absolute favourites include roast duck, and crispy pork and Sup Kambing (conveniently supplied with straws to suck out the marrow).

Since the Danga Bay Marina was closing we have moved our yacht Yana de Lys to the Senibong Cove Marina near Permas Jaya.

A causeway is a road not a bridge

I’d done a quick Navionics electronic navigation calculation on my phone while I was eating lunch one day.

Despite not having signed up to be a solo sailor, I figured I could sail the ten or twelve miles on my own.  I know I’m not the first and certainly won’t be the last person to make this dumb mistake.  I wondered why there was no Air Height shown on the chart for the bridge to Singapore.  Doh!  That’s why its called a causeway – it’s basically a road not a bridge.

I called the other captain back from Australia for the 90 mile circumnavigation of Singapore. Meanwhile I get to enjoy eating and exploring this dirty old town of Johor Malaysia.

A snake in the sink and other fun at Danga Bay